I unbox them so you don’t have to!

On August 1st, I spotted the Hatbox Ghost as well as the Bat as separate listings on eBay. However, it was clear these were sold directly from the factory in China (the seller’s location and the fact that no Park seemed to have the toys were a giveaway). Regardless, I shared the news on the official Travels with Toys Instagram account.

Priced at $49.99 before Annual Passholder discounts, the pair are part of a limited release plush series, according the box.

I am the type of collector who plays with her toys so, of course, I could not wait to break these two out from the confines of their cardboard prison.

I loved all the nods to the Disney Parks attraction that were added to the packaging. The most obvious one was Madame Leota’s epitaph (on the back of the box) as seen in the queue at the Magic Kingdom version of the attraction but, upon opening the box, I noticed that the lining had a pattern similar to the wallpaper found in the mansion.

Now, let’s take a look at the plushes!

First up is the Hatbox Ghost, a recent addition to the Disneyland Resort version of the attraction and a popular figure in the attraction’s lore.

From the top of his hat to the heel of his shoes, Hattie here measures about 12 inches. He is designed to be posed in a seated position yet he does not have a bean bag bottom. If you set him just right, he doesn’t fall over though.

The glow-in-the-dark element mentioned on the box can be found on the head in Hattie’s hatbox. I did not have a chance to test out the quality of the glow though.

The Bat is reminiscent of the ones found on the stanchions in the attraction’s queue. It’s wingspan from end to end is about 12 and a half inches long. It is a darling design but this plush cannot remain upright without leaning against something. 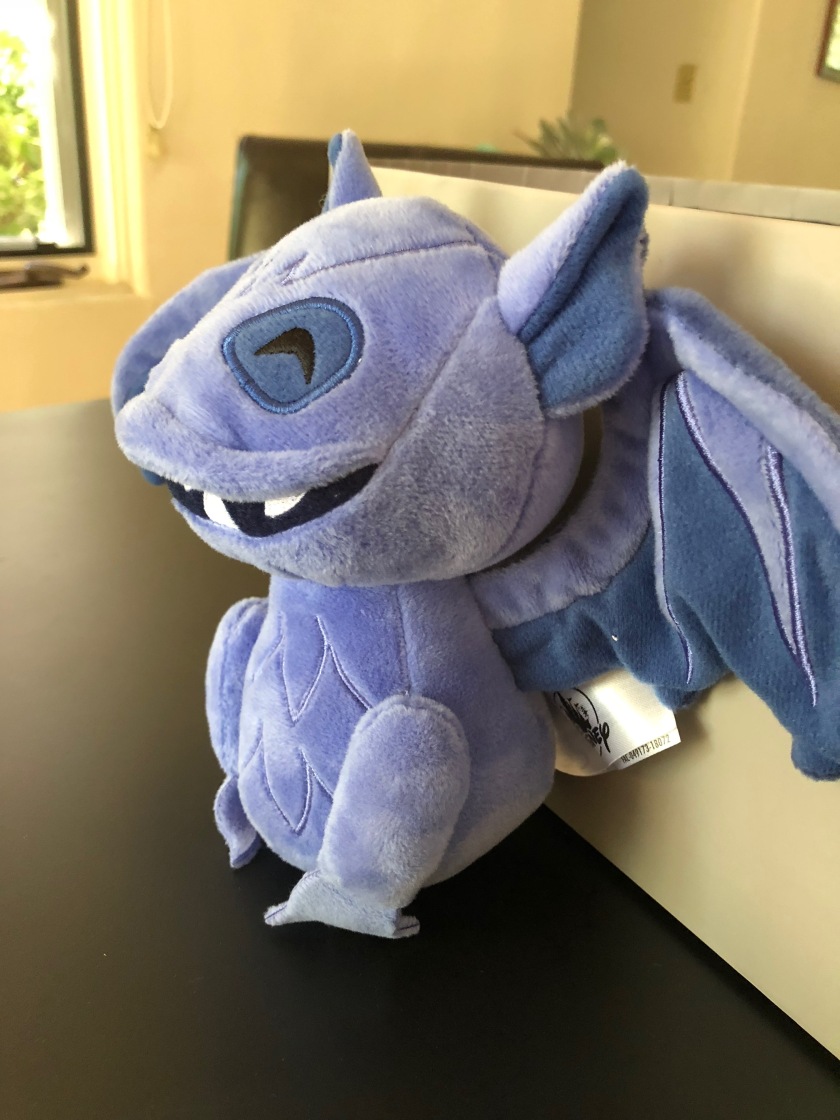 My only real complaint with this guy is that the seam on his back is puckering and doesn’t look very strong. I think I am going to have to be especially careful with this one.

Despite the small quality issue with my new Bat friend, I am beyond pleased with this plush set. I love the designs and frankly, the fact that they exist. And I am super-excited that this is part of a series! What happy haunt are you hoping to see represented? Personally, I am still holding out for a plush of the Grave Keeper’s dog (I just want to give him a hug!). And with next year being the 50th anniversary of the Haunted Mansion at the Disneyland Resort, who knows what will materialize?

About This Blog and Its Author

Travels With Toys was initially created to celebrate my love of Disney Parks and Resorts along with the brilliant merchandise that the Walt Disney Company designs. I later decided to expand the blog’s scope and not only follow Disney toys but also just general fun playthings and collectibles.

My name is Natalie Kipper and I am the creator/author of this blog. I have written about toys for sites such as Tomopop (RIP) and Geekscape and covered Disney Parks for the likes of Laughing Place and WDW News Today.

I hope you enjoy your time at Travels with Toys!

[Logo and banner drawn, painted, and otherwise created by the talented Rio McCarthy]

Articles From Days Past